In the Ching dynasty, thousands of these beautiful necklaces were created for the Imperial Court. The necklaces appeared in the Court between 1644-1911, but only a few remain intact to this day, perhaps because they were strung on silk cords that deteriorated over time, or because the beads were reused for other purposes after the fall of the Imperial Family.

1. Antique Chinese Lapis Court Necklace:
Lapis beads have a long history in China. Lapis came from Afghanistan which made them quite rare in China. Lapis has healing powers, and was the color used in Buddhism (Medicine Buddha). It consists of 108 Lapis beads, with strings of Turquoise and imitated Coral of glass. Middle Qing period, 1750.

2. Antique Chinese Zitan Court Necklace:
Zitan was the most adored wood of the Imperial Court Family. Legends say that only the Imperial Family were to use this precious black and rare wood. It consists of 108 carved Zitan beads with the Shou symbol and the gourd-shaped (Foutouta) in Turquoise or as a Buddha Head. It was worn on the back, connecting the counter-weight and drop to the necklace. Late Ming to early Qing period.

3. Antique Chinese Amethyst Court Necklace:
Amethyst is one of the most popular varieties of the Quartz family; there are ancient legends about these lovely stones. It was believed that Amethyst protected against poisons; this type of necklace was often worn in the 18th century court. It consists of 108 Amethyst beads, small Crystal bead strings, Jade rings and Cloisonné balls. 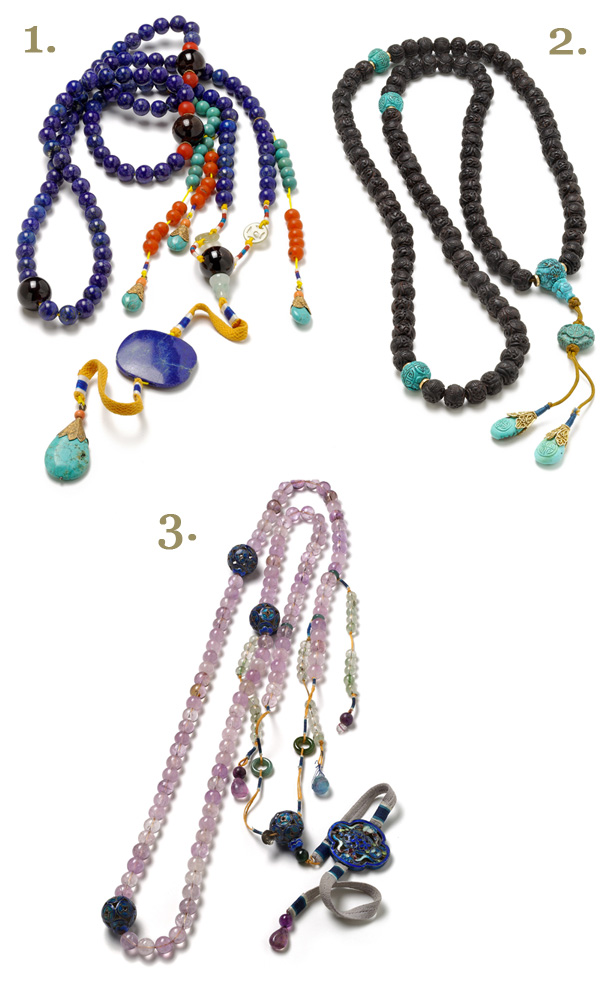