Let me introduce myself. My name is Eric Eggers-Lura, founder and owner of Samsara Jewellery in Denmark, Russia and China.
In the following I will tell you the story about my family’s relation to, and history in China, and of my inspiration and mission regarding the outstanding jewellery of Samsara.

My Grandfather, Roger Meffreys, was an honorable Frenchman. Having already served for 20 years in the French diplomatic service, he was posted in China in the year 1936, first in Shanghai as a General Consul and later in Beijing as Ambassador for France, for 10 years altogether. As my grandfather was tall, he was called “Tai Tuan”, which means great man. His ears were long too, and some of his Chinese friends told him that he was a lucky man because of his resemblance to the noble Buddha.

My grandfather had a sense of duty and was very honest, helpful, hard working and friendly to all people; a true diplomat. During his nearly 10 years in China, he became very fascinated by the Chinese Culture and Fine Chinese Art. When he had a few moments of spare time, he would often visit all the fine Antique shops around Shanghai. But especially the Eagle Antique shop in Beijing had his big interest. Here he was introduced to fine art, and the foundation to his big Chinese collection of over 1000 Chinese antique pieces was established. He was a true French connoisseur. 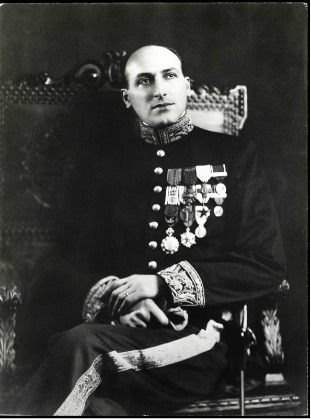 In the evening after work at his office he would read and study Chinese history and mythology for many hours together with my mother, at that time a young girl.